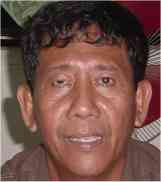 The webmaster interviewed the local police officer, regarding dangers, criminality and rebel activity in the local area. SPO4 Henry T. Capal, the deputy assistant police officer told him that since the start of his duty in this office 2001 there has been no real crime being recorded. This confirmed the information the webmaster got from the Parish Priest as well, who mentioned that the San Vicente people are basically very peaceful people. Besides the typical problems coming out of drinking too much, like shouting and a little fight, nothing ever happened in San Vicente. But the San Vicente like to take every opportunity to celebrate, which means, there will be quite a lot of fun, including drinking. On the other hand the own experience of the webmaster is that in such cases, the people start to become a lot more fluent in English, and have a strong urge to entertain the foreign guests.

There are three operational resorts along the Mananap river:

Famous sites in the San Vicente area are: